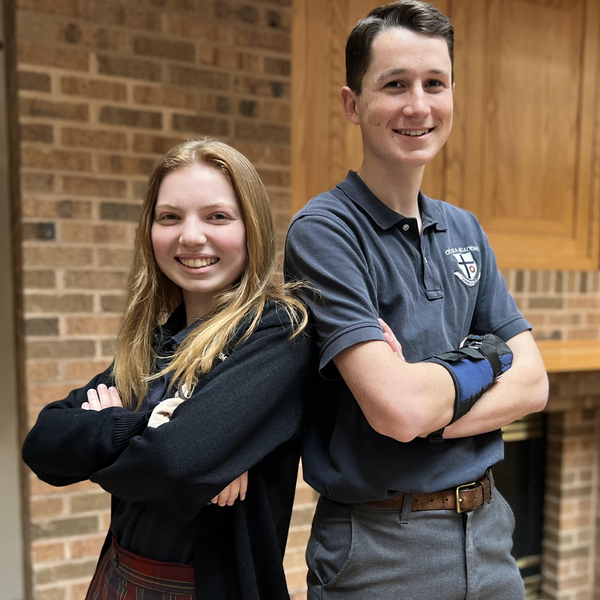 Our current leaders, Brigid McCarthy and James Schwartz, will pass the torch to Jude and Bea for the 2022-2023 school year!

Though previously these roles were chosen at the discretion of the teachers, this year the student council coordinated an election by the students themselves. Thus implemented, Upper School students were given a formal opportunity to express their choice of the new Chancellor and Secretary. It was up to the candidates to convince the voters of their capability to become the best leaders on the path of success.

Right before Campaign Week began, all of the candidates gave a speech and answered an open Q&A from their peers.The following week, campaigning commenced with posters covering the hallways and mini spiels and skits at morning convocation, not to mention many little treats and party hosting. Last Thursday, 8th-12th grade students enthusiastically lined up and down the hallway to cast their ballots. Shortly after the votes were collected and counted, the tension was broken by Chancellor McCarthy announcing the winners.

Jude Lagarde, a current Fisher House Representative, ran an impressive and successful campaign and has high hopes for next year, with many new ideas to improve and old traditions to bring back to life. To help along the way, Bea Stanford will move on from being a Roper House Representative to becoming the new secretary.

We are all confident in both Jude’s leadership expertise and Bea’s knack for organization, so rest assured we will have a promising Student Government in the coming academic year!